20% Off
Limited Period Offer
Home » Blog » lean six sigma » Is Lean Six Sigma worthwhile for your IT Company in 2021? 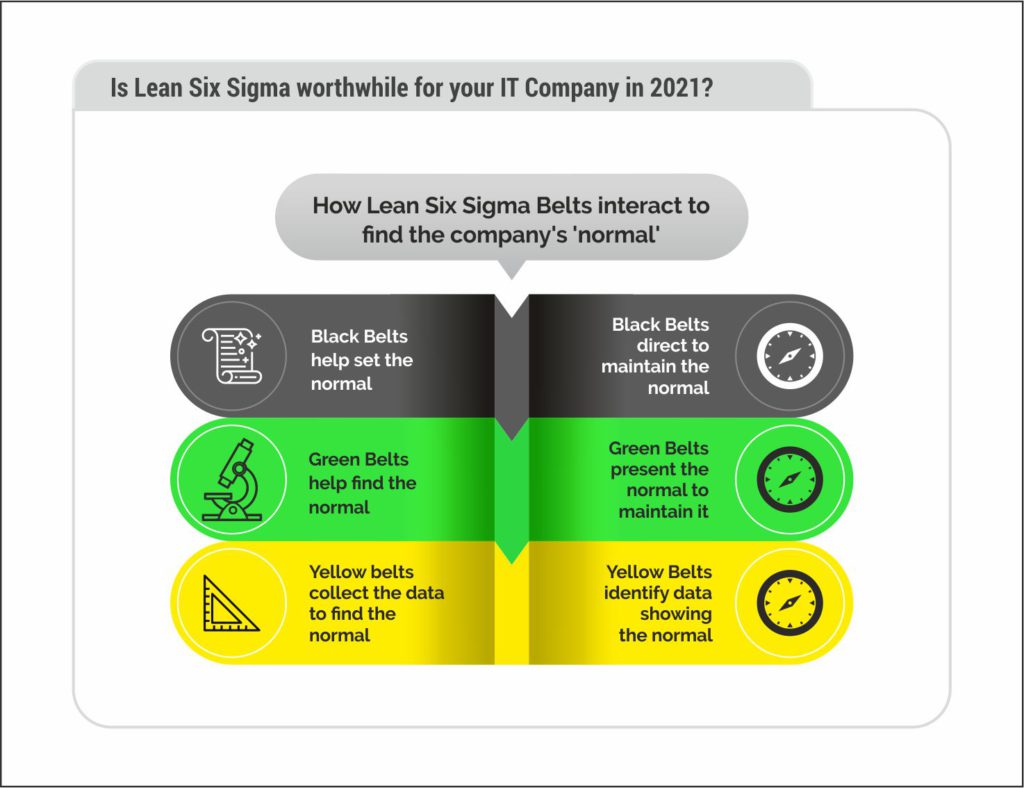 Is Lean Six Sigma worthwhile for your IT Company in 2021?

Pushing Six Sigma beyond its limits

As a CIO, or CTO,or even CEO at an IT company, you have a significant part of the business. You have your ideas. They shape the business and make it what is. Your products and services have the unique stamp of your ideas.

In other words, that is the normal for your company.

Six Sigma helps you define a view of your normal. It need not be quantitative. It only has to make sense for you and your business. The usual data rich and heavily number driven approach of Six Sigma may not hold much for you, and that is okay !

The philosophy of Six Sigma works on a normal curve, that is, on a definition of what usually occurs in your company. And you have to set your normal by just being 'you'.

Six Sigma works on a system of Belts, namely Black, Green, and Yellow, to help find and propogate the normal for your IT company.

I'll give you an example.

A company came up with its own brand of uniquely coded e-mails to be used by IT equipment manufacturers for their marketing campaigns.

The Yellow Belts in this company used to contact and talk to to users about how useful the e-mail templates were to them. They used to document the responses.

The Green Belts used to analyze the responses and find common traits among them. They found out that their creativity was what appealed to the e-mail senders.

The Black Belts put together everything they found and used their knowledge to influence the developers, members of management, and the other Belts to accept this new found normal and to maintain it as an ongoing process. This required a lot of precisely crafted communication as different people with different viewpoints were involved.

You'll find that nowhere in these going-ons were hard core statistical skills involved. In fact, the Belts focused on getting information at the source and using it as quickly as was possible.

So, is Lean Six Sigma worth it?

Lean Six Sigma was traditionally used to find and fix errors. But it need not be the case today. In fact, in an age where communication and people skills make or break deals, Six Sigma can be put to optimum use to get as many human contacts as possible, on the same page as your IT company. To do that, you must know what you stand for, or what is the normal according to you. Lean Six Sigma helps show the way to that end !